Heartland Dreamers have their say in nation’s capitol 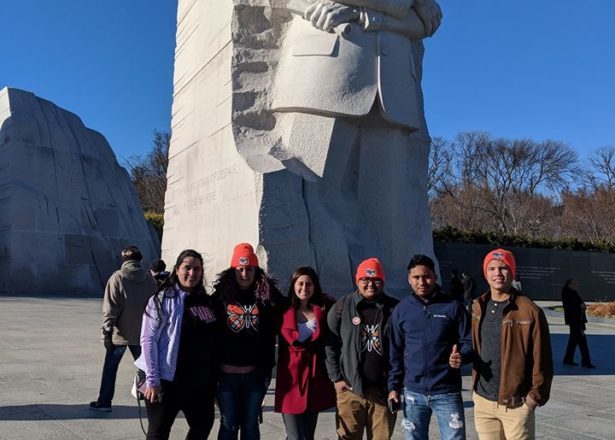 With President Donald Trump's deadline for Congress to revamp DACA unmet last fall, she organized a September 10 rally in South Omaha. Dreamers and allies gathered to show solidarity. She then shared her story in a Lincoln Journal-Star op-ed and in the locally produced documentary and play We Are Dreamers.

"It was great because people got to know a little more about our struggle," she said.

Two weeks ago, with the March 5 deadline looming and redoubled U.S. immigration enforcement efforts placing more undocumented residents in detention, awaiting possible deportation, tensions ran high. True to her "drive to speak up against injustice," she led a group of Nebraska Dreamers to Washington D.C. to join United We Dream demonstrations demanding Congress act to pass protections and paths for citizenship. It did not.

Thus, those affected like her remain in limbo with DACA provisions slated to end pending a new program.

She's in the process of obtaining her green card.

Before she and her fellow travelers could make the trip, they had to find funds to cover air fare. United We Dream picked-up meals. She donated the hotel tab.

"We raised $1,676," she said. "It was nice to see our community had our backs and they wanted us to go to D.C. This trip was so important to me and the local movement."

The Omaha contingent arrived Feb. 28 and returned March 6. They were joined by activists from Centro Hispano in Columbus, Nebraska. The groups coordinated schedule to walk in a planned march.

"My goal was to be there when the Dream Act passed.

I had a lot of hope the government would act on March 5 or before," she said. "I wanted to be there to witness history happen. It did not happen. It was sad. But it was good to be there with other Dreamers. We just get each other. We know exactly what each other has been through. We all share the same heartbreak, the same roadblocks, the same fears.

"The trip opened our eyes about what's going on in our government and how the Trump administration is pushing its racist agenda on our community.'

She won't soon forget the experience of rubbing shoulders with thousands of kindred spirits, voicing pro-DACA chants, carrying signs with slogans, and seeing some protesters engage in acts of civil disobedience that resulted in arrest. All unfolding in front of national symbols of power, including the White House.

"It was empowering. It was a breath of fresh air and a reminder we're not alone in the fight. it made me feel not as afraid, not as worried. It put things into perspective.

"The march was really the highlight of the visit. That's why we went there. We walked to Capitol Hill. We had an 'artivism' moment where we put some paper flowers on the ground that read: 'We Rose Unafraid.' We wanted to beautify the word undocumented to bring attention that we're not afraid" (and not apologetic).

"It was a great experience. It opened my eyes to how much support we actually have," trip participant David Dominguez-Lopez said.

"We did a (peaceful) office takeover of Rep. Bacon's office," Habbab-Mills said. "We went there because he's said he supports Dreamers. We appreciate that. But we don't appreciate him supporting bills, such as the Secure and Succeed Act, that will harm our community."

The proposed legislation seeks to find a permanent solution for DACA by tying it to more border security, ending family migration, cancelling the visa lottery and building a wall.

"We were there sharing our stories, chanting and asking him to not vote for the Secure Act. It's this horrible bill that would build a stupid wall, give more money to the Department of Homeland Security so they can do raids and put more agents on the street."

Given the Republican majority's anti-immigration stance, Habbab-Mills is leery of promises. Distrust intensified when leaked government memos revealed discussions to use the National Guard to maintain border security

She's concerned "more families are going to be apart" in the wake of immigration crackdowns.

"On a personal level, if my mom were to get pulled over by a cop who does not like immigrants, she faces a good chance of being deported. The fact I cannot help her, breaks my heart. Under the current political climate, we need a way to protect family members under attack."

Another goal of the trip was "to plant the seed of social justice with the Dreamers who went," she said, "and that's what's happened," adding, "Everyone's ready to get things going back home to stop the Secure Act."

"it inspired me to learn more and be active in my community and to work with Amor and the rest of the 'D.C. gang,'" said Dominguez-Lopez.

Habbab-Mills traces her own social activism to seeing disparity growing up in Mexico City and to doing Inclusive Communities camps here. She earned high marks at Duchesne Academy and Creighton University. She founded the advocacy group Nebraska Dreamers. She works as a legal assistant at a law firm and is eying law school. She hopes to practice immigration and human rights law.

"If we're not the ones speaking up, who else will? We want people to know we are educated and even though we cannot vote, we have the power to influence people on how they vote. Social media is huge for us.

"Bringing awareness to the issues is a way of creating change. Planting that seed will bloom into a more just society one day. I think it's a duty to speak up when something's not right. If i don't, I'm part of the problem."

Having attained personal and professional goals, Lopez now wants to help other Latinas