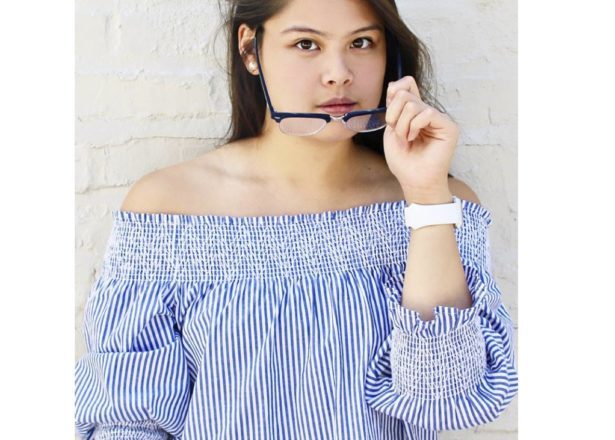 Nebraska is far from the theater capital of the world, yet many natives have trod the Broadway boards – from Henry Fonda to Sandy Dennis to Andrew Rannells. Actress-singer Roni Shelley Perez, 21, hopes to join their ranks. The Omaha Marian and University of Nebraska at Omaha graduate has graced several area stages and is now pursuing her dream in New York City during winter audition season.

This daughter of native Filipino parents has prepared for this all her life.

"I've been singing since I was very young. I sang-along to Barney songs ay 3. I started playing guitar at 8," said Perez.

She also plays the ukelele.

She began performing for family functions and Filipino community gatherings at 11.

"I used to play guitar and sing Filipino covers."

It earned her spending money.

But performing is, first and foremost, "a healing art" for Perez. "Stories told in songs can be relatable. People going through that same situation need to hear these stories. It's hard for people to be vulnerable, so to see someone else vulnerable helps them to know it's okay to feel.," she said. "Performing arts can be very impactful. It's a shareable, very much a collective experience."

In SNAP Productions' mounting of In the Heights at Omaha South High last spring, Perez's character Nina mirrored her own life as the eldest child of aspirational immigrant parents in a tight ethnic community.

"Like Nina, there was all this pressure on me growing up to 'Go, you can do this.' That role answered a lot of questions for myself."

She found support as a UNO Goodrich Scholarship Program recipient.

"Goodrich was like a family and definitely one of the best things I took from my undergrad. They believed in me and took a chance on me."

Her parents were initially dubious when she majored in vocal performance and musical theater.

"Every immigrant parent is hoping for the American dream and I'm going into a field where financial stability is not really a thing. They were scared for me to go into music. But then as soon as opportunities started happening (scholarships, prizes, accolades), they realized, 'Hey, you can do this.' I feel like I've been doing it for so long and it's been such a huge part of my life that I can make it into a career."

"She's a big influence. She represents the Filipino community in musical theater."

Filipino actresses have made waves in Hamilton in New York and London. "All these people are just very inspiring." Then there's singer-actress Sarah Geronimo. "Growing up, my mom would always play her music and I always looked up to her. She has a beautiful voice. I wanted to sing like her. I wanted to be like her."

Perez dreams of Broadway but for now her goal is to "just perform professionally" as a working artist. "If it;s there, then I want to turn it into something bigger. I don't even know what I'm capable of yet."

It's doubtful any performer from Neb. has been more prepared at such a young age. She boasts years of high-level training and performing. At 18, she won the part of Mary Magdalene in an Omaha Community Playhouse production of Jesus Christ Superstar. She's worked with New York stage professionals at the Open Jar Institute, NYU Steinhardt's Summer Study in Musical Theatre and Shetler Studios' workshop of Zanna Redux.

"I've been going to New York every year now to see where I am ability-wise. I've been making connections."

In Omaha, she got scholarships to Broadway Dreams Foundation Summer Intensive Workshops in 2013 and 2014, studying under and performing with Tony Award nominees and winners. It grew her confidence.

"It showed me what I need to continue working on but also it was like, 'Hey, if I'm able to perform with them right now, I'll be able to stand my ground and eventually get to their level too.' It's been very encouraging and definitely humbling. Like, I'm clearly not the best, but I can work at it and come to that level."

She's participated in master classes through Omaha Performing Arts. The 2016 National Student Auditions competition winner has been recognized by the Playhouse, Theatre Arts Guild and Omaha Entertainment and Arts Awards. Last year, she and a classmate won first place in the Musical Theatre Division of the National Opera Association’s Collegiate Opera Scenes Competition.

She attributes her drive to her hard-working parents, who own their own business.

"I want to give back and work just as hard. I can't even fathom coming from a third-world country to the United States with poor English and trying to start a family and career. It's very inspiring and always on my mind as I take on new roles and shows."

At 20, Perez earned the lead in Heathers at Omaha's Blue Barn Theatre. Her character sings the entire show, so she trained to build vocal stability and stamina. It was both her first lead and first paid acting gig.

"That role came very close to my heart," she said. "I'm grateful the Blue Barn took a chance on me."

She returned there this past summer as the title character in Priscilla.

Her most "demanding and rewarding role" came last fall in UNO's production of Spring Awakening.

"This one really tested my vulnerability and sacrifice. I had to let everything go. That was very hard to do. Everything I'm doing is giving me a better version of myself or helping me be my best. There's always something to learn – always. I love a good challenge."

Blue Barn artistic director Susan Clement-Toberer, who's twice directed Perez. is convinced she has what it takes to make it.

"I expect it and I'm exhilarated for the moment when that happens," Clement-Toberer said. "She was born to do this. She's got the vision of what she wants to do, and if there are nos along the way, it's not going to stop her."

Perez herself said she's going after it now "because I think I do have what it takes to succeed."

A heart for humanity and justice for all